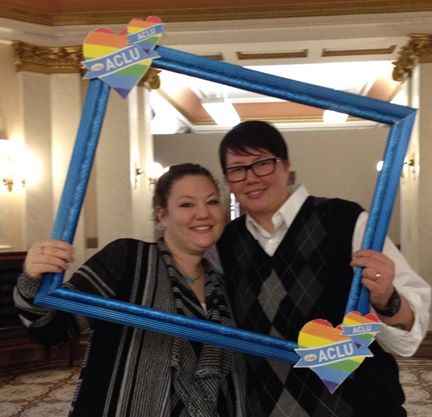 Happy Anniversary, Montana!  One year ago today, LOVE won in Montana when District Court Judge Brian Morris ruled in favor of love and for the right of same gender couples to marry.

“These families, like all of us, want their children to adventure into the world without fear of violence; to achieve all that their talent and perseverance allows without fear of discrimination; and to love themselves so that they can love others,” Judge Morris wrote in an 18 page opinion. “No family wants to deprive its precious children of the chance to marry the loves of their lives. Montana no longer can deprive Plaintiffs and other same-sex couples of the chance to marry their loves.”

ACLU of Montana coordinated celebrations of the decision for November 20th - the first day of marriage equality in Montana.  Each was complete with officiants, photographers and cake for the first applicants at the courthouses in six cities.

Kileen Marshall, ACLU of Montana's Development Director , officiated the first weddings in Missoula.  In recognition of the anniversary, Kileen shares her memories in a special TBT (Throw Back Thursday)

Thursday, November 20th, 2014 was by far one of the coolest days I’ve had working for the ACLU over the past ten years. I heard the news on Wednesday afternoon when Jim Taylor, our normally stoic Legal Director, shouted “WE WON” from his office downstairs. Within minutes, the staff in the office were hugging and beaming with pride in the common space. Our Field Plan for the “Day of Victory” had already been arranged and so I knew that while my colleagues were representing the ACLU in five other cities across the state, I would be at the Missoula County Courthouse the next day available to officiate any couples who wanted to tie the knot. The thing is, though, I didn’t really expect anybody to take me, or the ACLU, up on the offer. 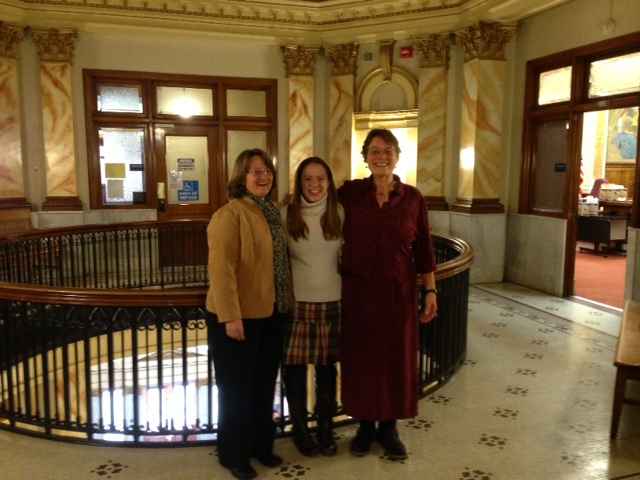 I sincerely hope someone writes in my obituary at the end of my life that one of my tiny claims to fame is that I proudly officiated the first nine weddings in Missoula County on the first day of marriage equality in 2014.

I shared with a few folks who I recognized that I was a registered officiant – “Spiritual Warrior of the Universe” to be exact – and that I was there to marry any couples who wanted to get married that morning. A few minutes later, the first couple came out of the office with their paperwork and immediately went downstairs to find a judge and took most of the crowd with them. The second couple came out and decided to have me, aka “The ACLU,” marry them since it was the ACLU who made their marriage possible in Montana and across the country. Before we could even start, the first couple, and the whole entourage, came back upstairs sharing that there are no Judges available for officiating in the mornings.

All of this to say, it was a flurry of ordered chaos. By the end of the first hour, I had married three couples, and by 11am all nine couples. In each ceremony, I asked each person to share with their spouse, friends and family, and bystanders in the crowd why they were marrying each other that day. Not surprisingly, every person that day, mostly older but some younger, spoke from their hearts about the decades of love they felt for one another, how the other made them the strongest and best versions of themselves, how they couldn’t imagine life without the other, and how they never thought today would come. Simply put, it was beautiful.

Apart from the general celebration of the day, two highlights stand out to me, both related to straight allies.

First, was seeing a handful of straight couples bring their toddler-age children to watch the weddings first-hand. When I asked one of the couples who I knew why, they said because they want to make sure their three-year old son grows up in a world where marriage equality is normal and they thanked the ACLU for allowing that to be the case. The other was how proud one woman, who didn’t know any of the couples there that day, was to watch each ceremony and then sign her name as a witness on a few of the forms. She came down to the courthouse to watch history be made in her hometown.

And that’s how I feel too – honored to be a part of history in some small way and to personally have been a part of one of the most meaningful moments of a couple’s life.

Reasons Why I-183 is Unconstitutional