ACLU of Montana  -  End of Session Summary and Highlights

Governor Bullock vetoed all three anti-choice bills to reach his desk. In his veto messages, Governor Bullock echoed the points we shared in the Montana Reproductive Rights Coalition’s veto request letter, and stated, “Montana's elected officials have no business substituting their personal beliefs for the sound medical judgment of our healthcare professionals or the deeply personal medical decisions of their constituents.”

The first bill, HB 587 by Rep. Keith Regier, would have banned the use of telemedicine for medication abortions. The next bill was HB 479 by Rep. Albert Olszewski, which would have forced doctors to share widely contested and inaccurate statements about fetal pain and ask women to consent to fetal anesthesia prior to an abortion after 20 weeks. And the final bill was SB 349 by Sen. Cary Smith, which would have required insurance companies to offer plans that exclude abortion services.

A fourth anti-choice measure, HB 425 by Rep. Matthew Monforton, would have placed a personhood constitutional amendment on the ballot, but died in the Senate Judiciary Committee.

Legislature Says “No, Thanks” to Anti-LGBT RFRA 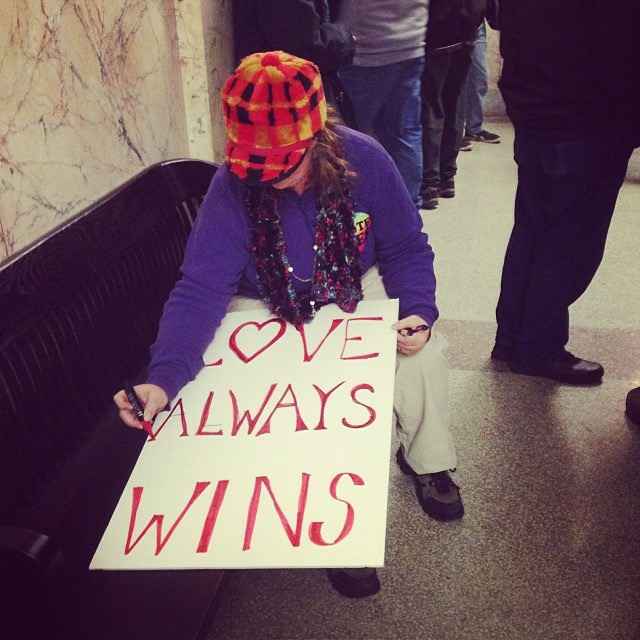 The Montana House of Representatives narrowly defeated HB 615 by Rep. Carl Glimm, which would have placed a measure on the ballot to create a Montana "Religious Freedom Restoration Act," or "RFRA.” Similar to measures introduced to tremendous backlash in other states like Indiana and Arizona, Montana's HB 615 would have opened wide the courthouse doors and allowed any person, corporation or other entity to claim an exemption from any law, policy or government regulation if the action might burden their religious expression. The bill appeared to be backlash from the great strides that LGBT Montanans have made in recent years, including marriage equality and passing four local nondiscrimination ordinances. A RFRA law could be invoked to undermine local anti-discrimination ordinances by allowing people or businesses to deny employment, housing, or services based on religious views. Several state agencies, local governments, business owners, faith leaders, and many others joined us in opposition to the bill in the House Judiciary Committee hearing. And while the bill did pass out of the committee, it failed to pass the House Floor on a 50-50 tie vote.

Legislators committed to studying several important criminal justice issues over the interim by passing SB 224 by Sen. Cynthia Wolken, to create a commission that will comprehensively review sentencing laws and practices, and HB 627 by Rep. Randy Brodehl, to create a task force to study the Office of Public Defender. Both bills offer the opportunity to dig deeply into the root causes of overincarceration and our overburdened OPD system, respectively. The legislature declined, however, to pursue a study of the state’s contractual relationship with Corrections Corporation of America and the operations of the private prison in Shelby, when the House Judiciary Committee tabled SJ 3 by Sen. Robyn Driscoll.

The legislature also passed a handful of bills to reform our parole system and to expand access to DNA testing. HBs 28 and 135 by Rep. Jenny Eck will require audio and video recording of Board of Pardons and Parole hearings and will provide minimum criteria for the BOPP to follow when making its decisions, respectively. HBs 43 and 516 by Rep. Margie MacDonald will allow the Governor new authority to grant clemency in non-capital cases and will expand access to DNA testing in cases where the convicted person is no longer incarcerated, respectively. The Governor has signed all four of these bills.

A bill to provide greater protections before a person is transferred from the Montana State Hospital to a Department of Corrections facility passed the legislature, but was vetoed by the Governor. SB 316 was introduced at the request of Disability Rights Montana in response to our organizations’ litigation about inadequate mental health treatment at the state prison.

The second, HB 463 by Rep. Kelly McCarthy, revises our civil asset forfeiture laws by providing greater due process protections before seized property can be forfeited. HB 463 shifts the burden of proof in asset forfeiture proceedings back to where it properly rests: upon the entity seeking to have the property forfeited. HB 463 also creates a more protective standard for forfeiture proceedings. The government must show by clear and convincing evidence that the property was used in connection with, or is the proceeds of, the commission of a criminal offense, and the property owner must be convicted of an underlying criminal charge. Adequate notice and opportunities for innocent owners to protect their interests are provided, as well. Montana is only the second state this year to pass an asset forfeiture reform bill and we did so despite fierce opposition from law enforcement.
We were also successful in defeating SB 360 by Sen. Doug Kary, which would have allowed cities to criminalize public intoxication. That bill failed to pass the House Judiciary Committee.

While our most ambitious digital privacy and government surveillance bills did not survive the session, we did pass three pro-privacy bills and the legislature did approve a resolution (HJ 21 by Rep. Bryce Bennett) calling for a digital privacy interim study. HB 207 by Rep. Daniel Zolnikov updates our media shield law to clarify that data held by a third party – such as emails held on a server – is also protected. HB 343 by Rep. Bryce Bennett prohibits employers from requiring employees to turn over passwords to personal email and online social media accounts. And SB 209 by Sen. Matthew Rosendale restricts the use of data collected by vehicle event data recorders. The Governor signed all three of these bills.

Among the bills that did not pass, though, were HBs 344, 443, 444, and 445 by Rep. Daniel Zolnikov. These bills would have restricted the use of automated license plate scanners, prevented state cooperation with NSA surveillance programs, and generally required a warrant for access to electronic communications and devices, such as emails, text messages, and cell-phones and tablets.

New Records Detail DHS Purchase and Use of Vast Quantities of Cell...

Town Hall: The Future of Abortion in Montana