The ACLU of Montana's work on jails and prisons focuses on:

Proper heat, water, toilet facilities, sleeping conditions and exercise are constitutionally required, but a lack of enforceable and meaningful jail standards in Montana has resulted in disparate conditions across the state. In 2012 the ACLU of Montana embarked on a statewide jail initiative to get a better understanding of jail conditions in our state. Our investigative work included jail tours, interviews with sheriffs and jail staff and confidential questionnaires to prisoners.

We found that addressing these issues in county detention centers and providing efficient and effective pre-trial alternatives to detention must become a high priority for counties across the state. While litigation is an option, we believe that the ACLU and counties share the common goal of safe, constitutionally run jails.

During our 2012 tour of the Custer County Jail in Miles City, we discovered uninhabitable conditions. The dank, basement jail had no sunlight and was filled with mold. Prisoners had no access to fresh air outside exercise and the facility did not meet fire codes. We wrote letters to county officails on

August 23, 2012
demanding that prisoners be moved from the jail to safer conditions. Custer County 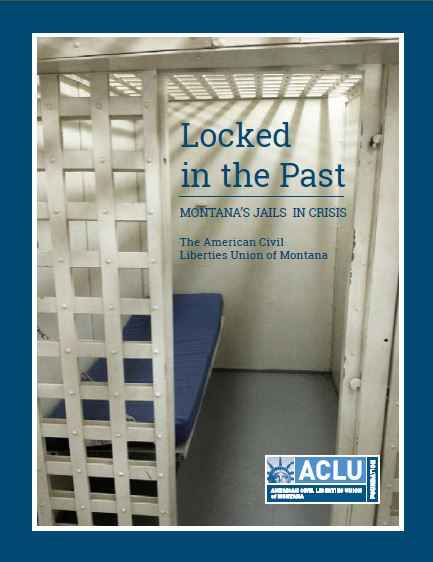 Locked in the Past: Montana’s Jails in Crisis, the ACLU of Montana’s comprehensive report of the conditions in Montana jails

The ACLU of Montana works hard to make sure that prisoners are treated the same regardless of sex, race, religion or sexual orientation. When we discovered that female prisoners were being discriminated against at the Montana Women's Prison and the Missoula County Detention Facility, we won relief for them in both locations.

At Montana Women's Prison prisoners were forced to participate in a degrading "therapeutic living community" not required of male prisoners at the Montana State Prison. Those women who refused were placed in solitary confinement. Female prisoners were not able to participate in the boot camp program (which offers training and the possibility of sentence reduction) available to men. Our settlement in the case Fish v. Acton ended the degrading Right Living Community and gave women the opportunity to attend boot camp.

Solitary confinement is fundamentally inhumane and wastes taxpayer dollars. We must insist on humane and more cost-effective methods of punishment and prison management. Prisoners in Montana State Prison's "Locked Housing Unit" (solitary) spend 23 hours a day in a cramped cell with little to no outside light and no human contact other than a tray of food pushed through a slot in the door.

Prisoners can be trapped in these conditions for weeks, months and even years. Many are released directly onto the streets without any kind of rehabilitation counseling or training to prepare them for re-entry into our communities, setting them up to fail. This increases their chances of reoffending and landing back in prison. Solitary confinement is the most expensive form or incarceration and the least effective in rehabilitation.

The ACLU, together with activists, mental health experts, and faith-based organizations around the country, is challenging the use of long-term solitary confinement - in the courts, in the legislatures, in reforms of correctional practice, and in the battle for public opinion. The goal of the Stop Solitary campaign is to limit the use of long-term solitary confinement in U.S. prisons, jails and juvenile detention centers.

In Montana, our case Katka v. Montana was filed in December 2009 on behalf of a 17-year-old who had been incarcerated in the maximum security section of the Montana State Prison since the age of 16, much of that time in solitary confinement. Raistlen Katka suffered from mental illness and tried to commit suicide four times at the prison, with a nearly successful attempt in June 2010. In the summer of 2010 we were successful in getting Raistlen transferred to the Montana State Hospital. He has since been released, and in spring 2012, the ACLU reached a settlement with Montana State Prison limiting the use of solitary confinement on juvenile and prisoners with mental illness.

When the government locks people up, it takes on the responsibility of caring for their physical and mental health. The ACLU of Montana monitors mental health and medical care in jails and prisons and advocates for proper care through policy channels and litigation.

As another example, in November 2009 we filed the case Bethany Cajune v. Lake County to help a pregnant woman who was denied prescribed medication by officials at the Lake County Jail. The ACLU of Montana and Bethany reached a settlement with Lake County in April 2011 to ensure that future pregnant prisoners with opiate dependencies will be referred to an obstetrical physician for evaluation and a treatment plan to prevent the dangerous effects of rapid opiate withdrawal.

Prisoners of all religions must be allowed to practice the religion of their choice while incarcerated and to communicate in their native language amongst other First Amendment rights. The ACLU of Montana has filed a number of cases to uphold these rights.

Prisoners from a privately-run prison filed complaints with the the ACLU of Montana because individual’s participating in a Native American sweat lodge ceremony were being subjected to mass strip searches before and after the ceremony. We filed the case Knows His Gun v. Crossroads Correctional Center in response, resulting in policy changes at the prison that better protect Native American prisoners' rights to practice their faith free from discrimination.

In another case, Diaz-Wassmer v. Ferriter, the ACLU challenged Montana State Prison's "English-only" policy for prisoners' written communications. The settlement now allows prisoners to communicate with friends and family in their native tongues.

Results from the ACLU of Montana's jails and prisons report

The ACLU of Montana Offers Support to State Officials to Safeguard...