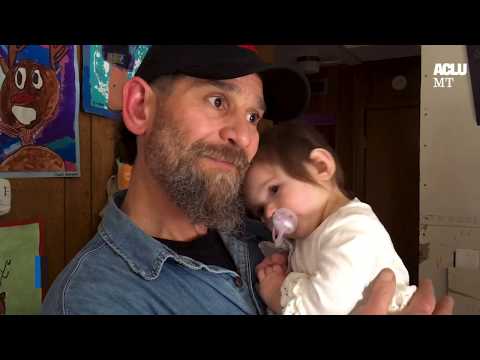 ACLU’s first lawsuit against the for-profit bail underwriters that drive the predatory bail industry ended in a financial payout. A Montana family who was stalked, hunted down, and held at gunpoint by bounty hunters in 2017 have settled a lawsuit filed against the insurance companies who make bounty-hunting possible and profitable. This settlement is the final chapter in a lawsuit filed in April 2019 by the American Civil Liberties Union, ACLU of Montana, Terrell Marshall Law Group PLLC, and Tipp Coburn & Associates PC on behalf of Eugene Mitchell,  Shayleen Meuchell, and their young daughter.

In April 2017, Mitchell and Meuchell were asleep in bed with their then-four-year-old daughter when six bounty hunters, hired by bail bondsmen and financed by bail insurance companies, broke down their front door and charged into their bedroom with guns and rifles pointed. They were there to arrest Mitchell, who had inadvertently missed a court hearing a few days before for two misdemeanor traffic charges. Three months earlier, in January 2017, Mitchell had been arrested and put in jail related to the traffic charges. Because he could not afford the total bail amount required for his freedom, and in order to secure his release and return home to his wife, two children, and work, Mitchell signed a contract with the defendants in this case: First Call Bail and Surety Inc., its owner Michael Ratzburg, and insurance companies Allegheny and International Fidelity Insurance Company.

When Mitchell accidentally missed a court date in April, his bail bondsman immediately activated a network of bounty hunters to search for and apprehend him.

“When those bounty hunters broke into our house, they terrorized us,” said Eugene Mitchell. “While we're thankful to receive this settlement, my wife and daughter still don't feel safe in our home. I know we’re not the only ones treated like this by bail companies, and I hope by filing this lawsuit we can help keep this from happening to more people.”

In a groundbreaking lawsuit, Mr. Mitchell and Ms. Meuchell sued not only the bounty hunters but also the bail bondsman and insurance companies, alleging they were all engaged in a joint enterprise under the federal Racketeer Influenced and Corrupt Organizations Act (RICO). The case achieved a first-of-its-kind ruling when the court denied a motion to dismiss and allowed the RICO claims to move forward.

In December of 2019, the court declared two provisions of a standard bail contract used by bail insurance companies across the country void and unenforceable. The first provision essentially prevents consumers from taking the bail industry to court, and the second requires consumers to outright surrender their legal rights.

“This settlement will help our clients rebuild their lives after they were traumatized by bounty hunters who took the law into their own hands,” said Alex Rate, legal director with the ACLU of Montana. “This settlement should send a signal to other for-profit bail companies: You can and will be held accountable for your exploitative actions. The court found that certain provisions in the bail contract used in this case were unenforceable, and we expect other courts will see it similarly.”

Mitchell’s case is indicative of a much larger problem in this country: a for-profit bail industry that preys on the most vulnerable people. Across the U.S., roughly 470,000 people — about 70 percent of people incarcerated in jail at any given time — sit in jail pretrial, without having been convicted of a crime, often because they can’t afford to pay a bail requirement set for their freedom. The commercial bail industry profits off people faced with the impossible choice between sitting in jail or entering coercive contracts with bond agents. This system disproportionately exploits Black and Brown people, further fortifying systemic racism.

“The experience of our clients is unfortunately all too common,” said Andrea Woods, staff attorney at the ACLU’s Criminal Law Reform Project. “Using the promise of freedom, the bail bond industry profits billions of dollars a year by preying on poor people who are desperate to return home to their families, jobs, and responsibilities. Wealth-based incarceration is antithetical to justice — it must be eliminated, along with the for-profit bail industry that underpins it.”

ACLU Lawsuit Goes After $2 Billion Bail Industry That Profits off...

If You Care About Freedom, You Should Be Asking Why We Don’t Fund...