What to Do When if You're Stopped for Photographing in Public

Taking photographs and video of things that are plainly visible in public spaces is a constitutional right—and that includes transportation facilities, the outside of federal buildings, and police and other government officials carrying out their duties.

The right of citizens to record the police is a critical check and balance. It creates an independent record of what took place in a particular incident, one that is free from accusations of bias, lying, or faulty memory. It is no accident that some of the most high-profile cases of police misconduct have involved video and audio records.

Relatedly, artistic expression should never be chilled out of fear of unwarranted police scrutiny. No one should ever find an FBI agent on their doorstep just because they photographed public art.

Through litigation, public education, and other forms of advocacy, the ACLU has defended the rights of photographers and all camera-wielding individuals to document freely.

When in public spaces where you are lawfully present you have the right to photograph anything that is in plain view. That includes pictures of federal buildings, transportation facilities, and police. Such photography is a form of public oversight over the government and is important in a free society.

When you are on private property, the property owner may set rules about the taking of photographs. If you disobey the property owner's rules, they can order you off their property (and have you arrested for trespassing if you do not comply).

Police officers may not confiscate or demand to view your digital photographs or video without a warrant. The Supreme Court has ruled that police may not search your cell phone when they arrest you, unless they get a warrant. Although the court did not specifically rule on whether law enforcement may search other electronic devices such as a standalone camera, the ACLU believes that the constitution broadly prevents warrantless searches of your digital data. It is possible that courts may approve the temporary warrantless seizure of a camera in certain extreme “exigent” circumstances such as where necessary to save a life, or where police have a reasonable, good-faith belief that doing so is necessary to prevent the destruction of evidence of a crime while they seek a warrant.

Police may not delete your photographs or video under any circumstances. Officers have faced felony charges of evidence tampering as well as obstruction and theft for taking a photographer’s memory card.

Police officers may legitimately order citizens to cease activities that are truly interfering with legitimate law enforcement operations. Professional officers, however, realize that such operations are subject to public scrutiny, including by citizens photographing them.

Note that the right to photograph does not give you a right to break any other laws. For example, if you are trespassing to take photographs, you may still be charged with trespass. 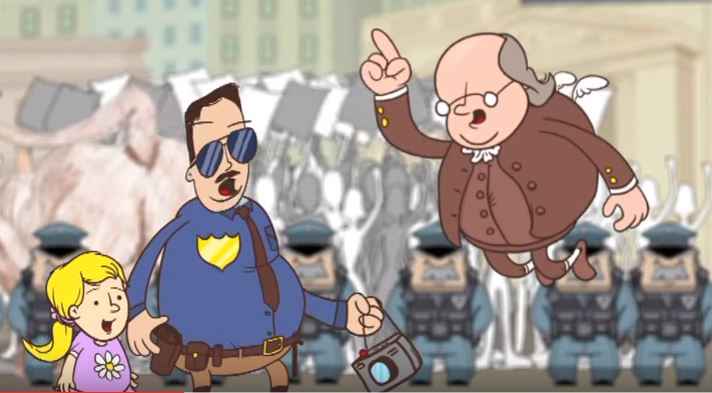 Using the ACLU’s “Know Your Rights: Photographers” resource, HitRecord – a collaborative artist production company – produced an animated video about the right to photograph in public, featuring music by the Gregory Brothers and directed by actor Joseph Gordon-Levitt.

With regards to videotaping, there is an important legal distinction between a visual photographic record (fully protected) and the audio portion of a videotape, which some states have tried to regulate under state wiretapping laws.

The ACLU believes that laws that ban the taping of public officials' public statements without their consent violate the First Amendment. A summary of state wiretapping laws can be found here.

Photography at the airport

Photography has also served as an important check on government power in the airline security context.

The ACLU does not believe that restrictions on photography in the public areas of publicly operated airports are constitutional.

ACLU of MT: Degrading Punishment For Men Who Lied About Military...