Thanks to your support, we did a lot in 2018! Here are some highlights from the past year.

1. We stood up for LGBTQ rights. We defeated the anti-LGBTQ and unconstitutional ballot initiative I-183. Montana voters stood shoulder to shoulder with the LGBTQ community and rejected a ballot initiative intended to intimidate and harm transgender and non-binary Montanans. 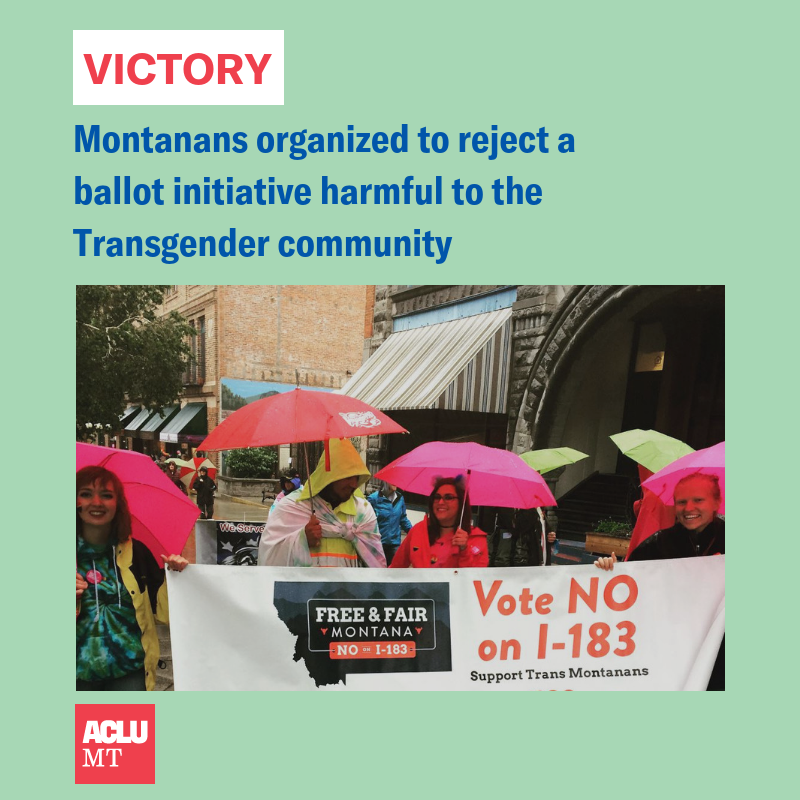 2. We educated people from across the country on Indigenous justice issues. ACLU of Montana staff members Meg Singer and Zuri Moreno were selected to present at the Nationwide ACLU Membership Conference in Washington D.C. They led a panel about Indigenous justice issues and were joined by Montana activists Ivan and Ivy MacDonald who presented videos about the crisis of Missing and Murdered Indigenous Women and the SURVIVE Act.

3. We won a 24 year legal struggle for incarcerated people with disabilities. We reached a settlement in Langford v. Bullock that requires the state to bring the Montana State Prison into compliance with the Americans with Disabilities Act. 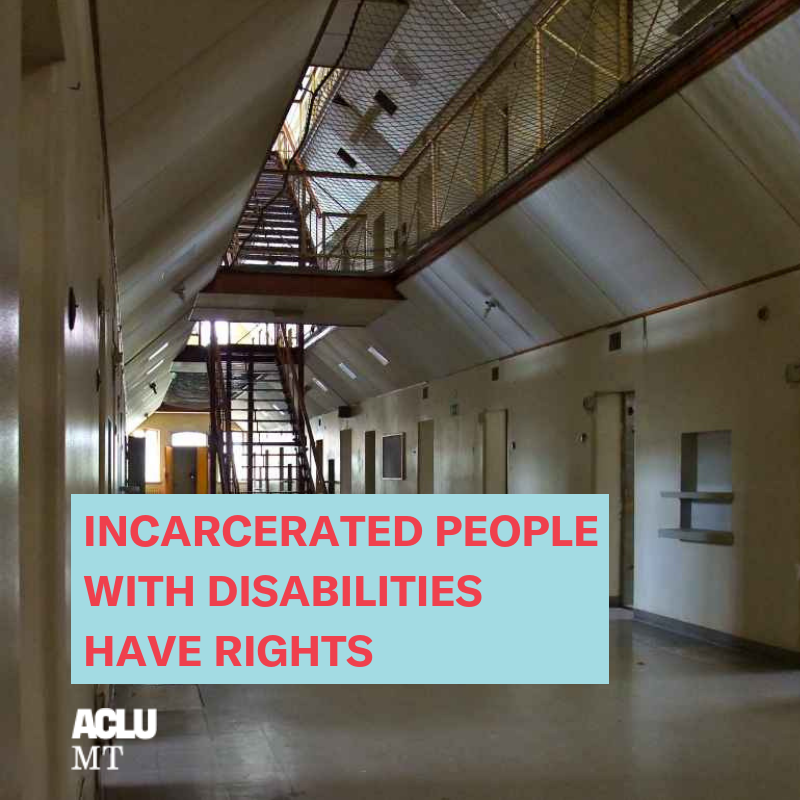 4. We fought for Montanans’ First Amendment rights to protest. We discovered that the government had plans to spy on Keystone XL protesters and we are continuing to monitor any new developments, even as construction is on hold. 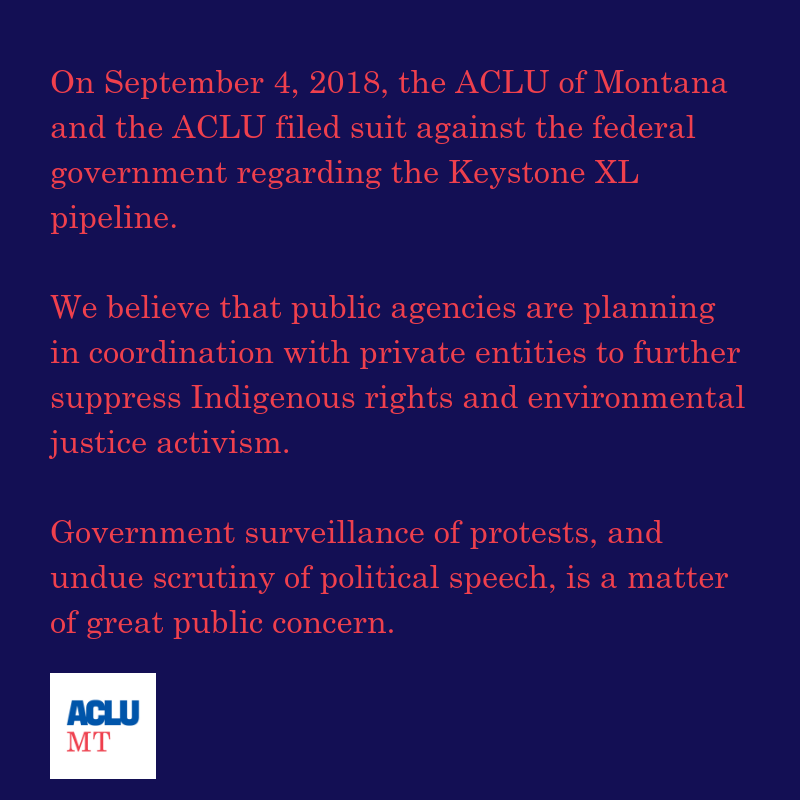 5. We stood up for reproductive freedom. We challenged a Montana law that restricts access to abortion care. A state district court granted a preliminary injunction barring the state from prosecuting advanced practice registered nurses (APRNs) who provide safe abortion care. As a result, while the case is pending, our clients Helen Weems and Jane Doe can provide abortion services without fear of prosecution. 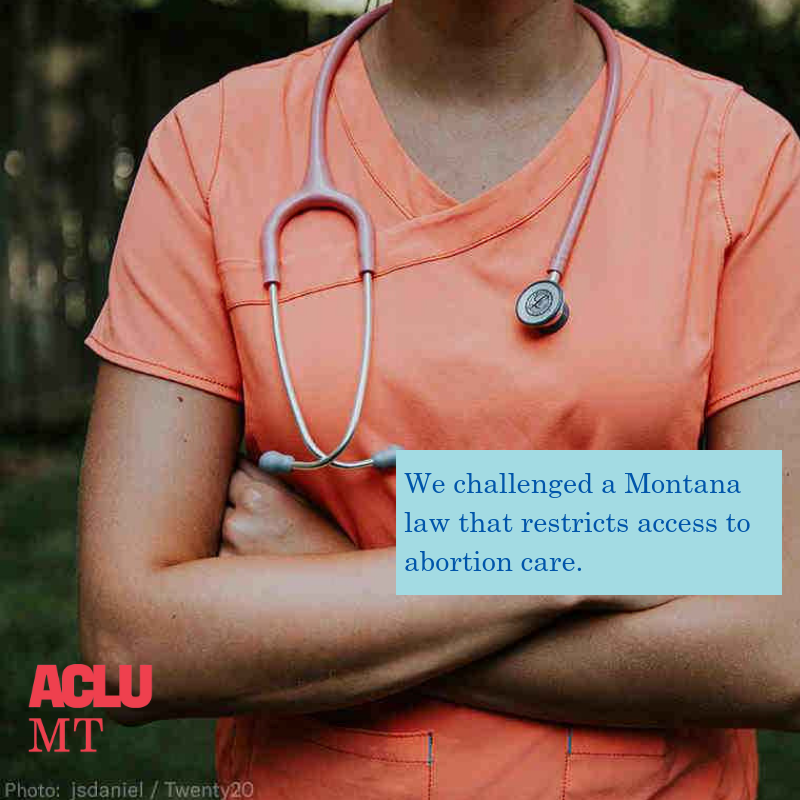 6. We participated in events throughout the state. Our amazing volunteers showed up in force to events throughout the year, including music festivals, immigrant rights gatherings, Wadopana Pow Wow, and Crow Fair. At Big Sky Pride, the rain couldn’t stop volunteers from donning their glitter and rainbow colors, handing out swag, and sharing information about trans and nonbinary advocacy work happening in our communities. When we received the good news that I-183 didn’t make it onto the ballot, volunteers rallied to spread the word on social media and joined us at our July celebration. 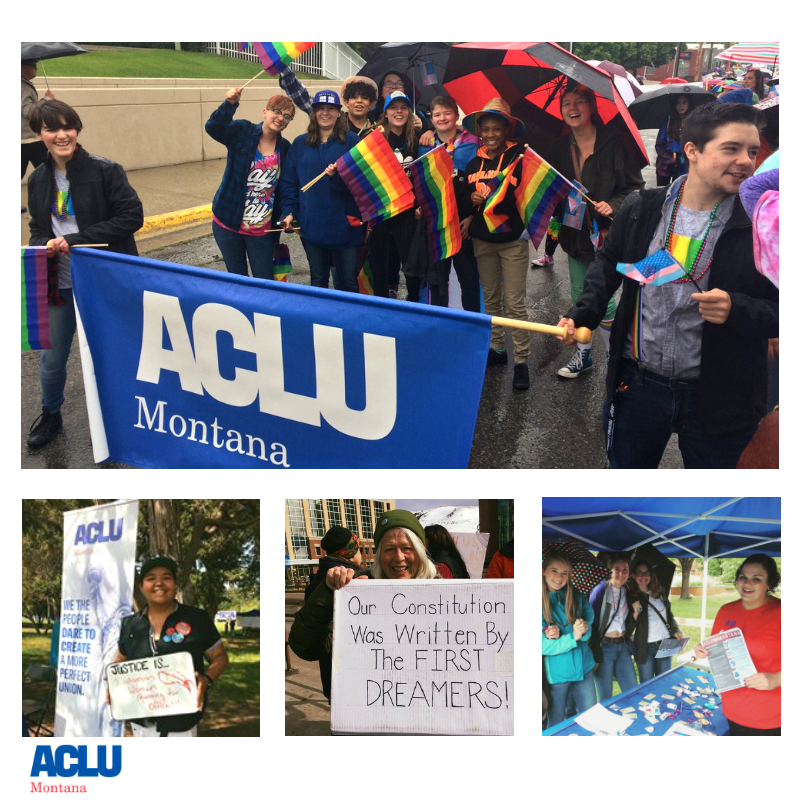 7. We protected immigrants’ rights. We filed a lawsuit to put a stop to illegal ICE detainers. Our goal is to end the use of detainers throughout the state of Montana. We are also representing Montanans who were detained simply for speaking Spanish. 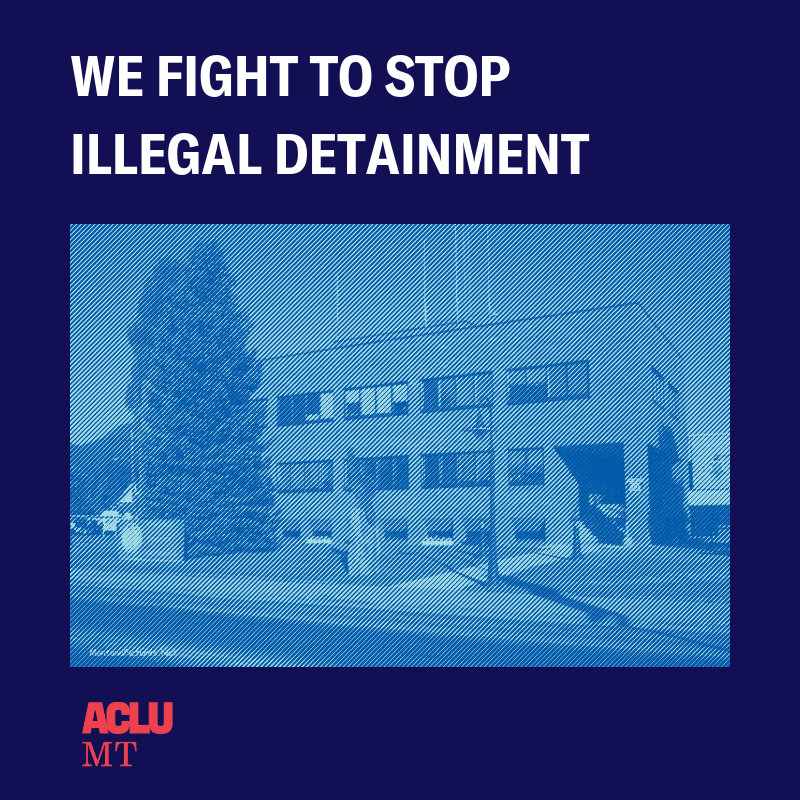 8. We protected the separation of church and state. In a huge victory for Montana’s public school children, the Montana Supreme Court ruled that it is unconstitutional to use public funds for private, religious schools. We filed an amicus brief in this case. 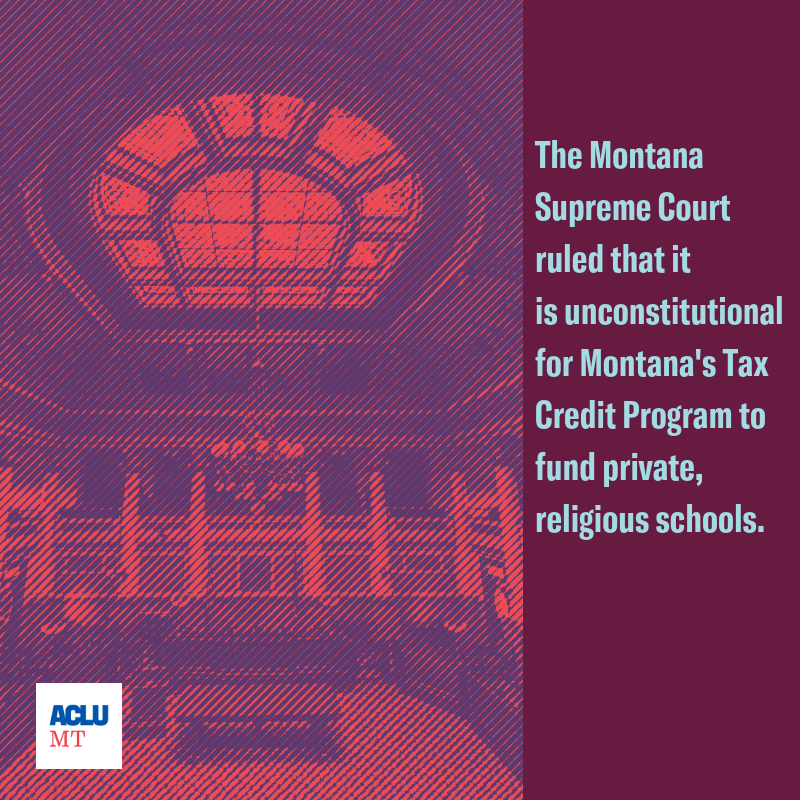 9. We honored social justice leaders. Our Jeanette Rankin Civil Liberties Champions this year were Judith Heilman, Carol Juneau, and Denise Juneau. Carol, Judith, and Denise are pathbreakers who have tirelessly fought for social justice in Montana, especially for Native people and other people of color. They are inspirational role models for those who want to make Montana a fairer place. 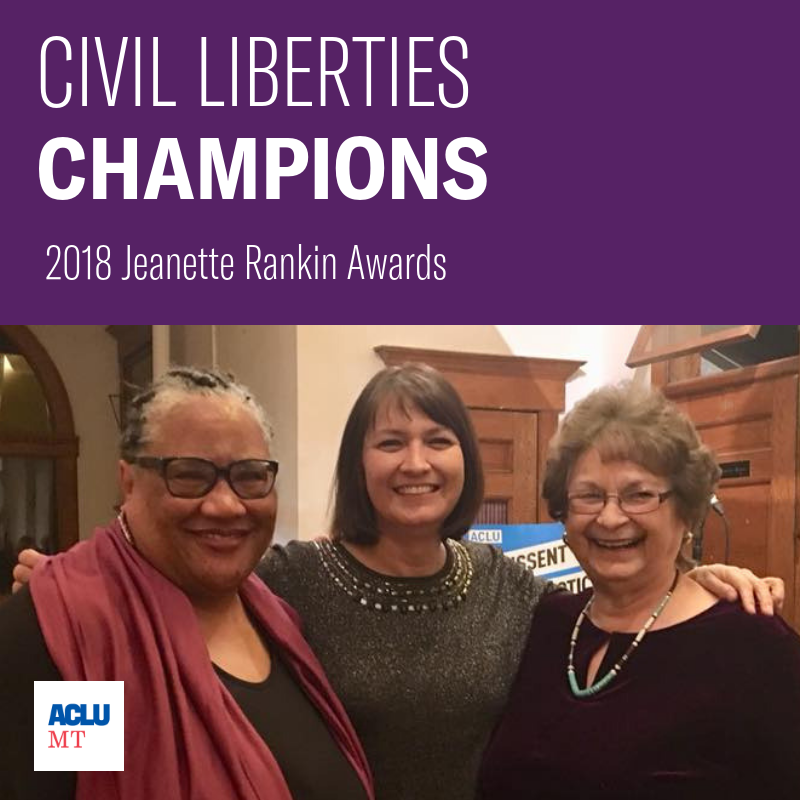 10. We’re growing! Because of your support, we’ve been able to add more people to our organization. Now we can do even more in 2019 and beyond! We remain committed to protecting the civil rights and civil liberties of all Montanans. 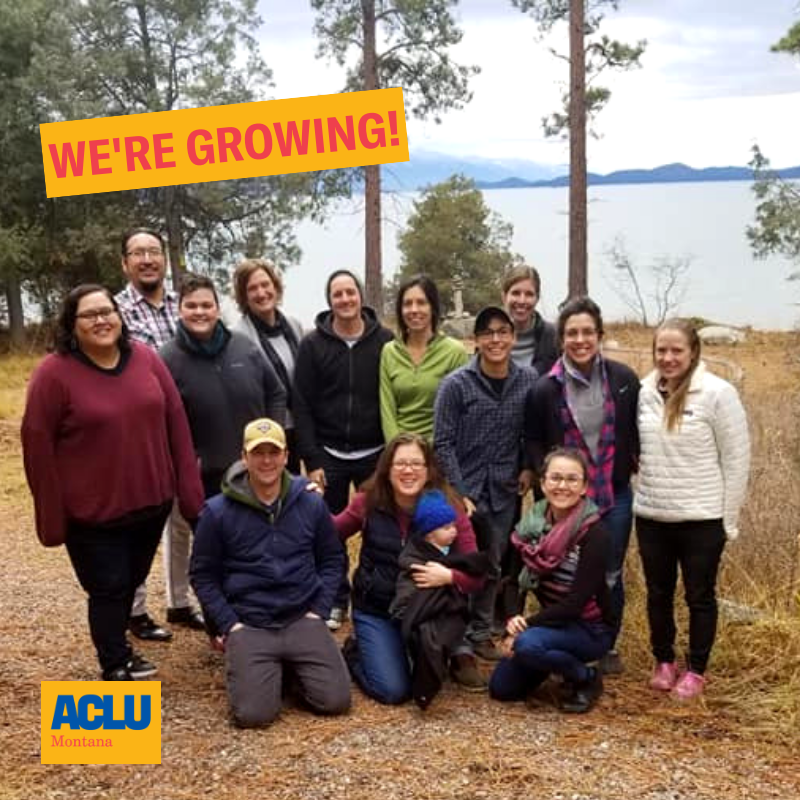 How to Start a Banned Book Club